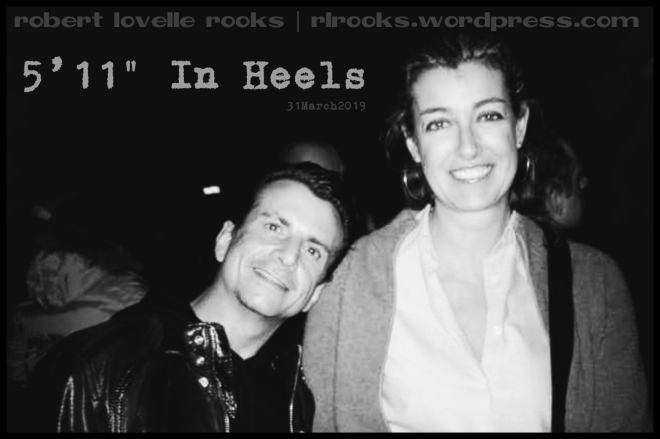 It’s no secret, I’m single as fuck.  And I’ve once again had to re-enter this incredibly nonsensical world of dating in 2019.  Word to the wise: If you’re in a relationship which isn’t quite perfect, but it in no way bad, unworkable or abusive and you WANT to be in a relationship long-term/marrige or whatever…. STAY IN THAT SHIT!  It’s real out here.  Just don’t do it…  You don’t want to be out here.

I’ve always known height was an issue with people as far as in comparison to folks who were in a relationship or at least seeking to be in one.  But for so long, I always thought it was us (men) who wanted to be taller than our women! Once again I’m speaking of the heterosexual monogamous relationships. Sorry gays.

I’m not sure why it was played off as otherwise.  Or maybe I was just misreading this all along.  But I don’t really believe it’s us [men seeking women] who have an issue with a woman being taller.  I for one, I know give ZERO fucks whether a woman is taller than me.  I have had women cheat on me, had women lie to me, had women lie to me about cheating, had women treat my position as a parent as if it were nothing and had a couple of women not give roadhead! Shit, if I could have the VERY FEW THINGS I require a woman to have in woman who was a few inches shorter than me… SO WHAT!  I will look up into those eyes with pure love and adoration every single day, thanking GOD/Allah/Krishna/Dyonisis/The Spaghetti Strainer, WHOEVER… for this woman.

How is this height issue important, and who the hell cares?

Duh… the epicenter of pretty much every problem on earth lol.  Just playing.  Sort of. Women want a man who is taller. While browsing through profiles on Tinder, or Bumble or whatever is your poison for seeking out people who are displaying the best sides of themselves in hopes of finding someone to ghost within a week; you’ll see women listing their height right next to everything else they find important. Such as

And they do it so slick.  “I suppose this is important now, so I’m 5’5″” Come on… YOU KNOW it’s important to YOU that’s why you put it there!  Right next to the fact that you MUST have a glass of wine every day to deal with your job… I mean.. because you’re a wine lover.  [Please].

I do however appreciate the women who come out and say it’s important to them. Even though I find it still… EXTREMELY insipid and a wasted requirement, there are women who will flat out let you know “I like to wear heels, and I need you a man who is taller than me when I wear heels.” Hey thanks for being up front…by why on earth does that really matter lol? Everyone has their preferences, I get it.  But you’re possibly going to miss out on a man who improves your life, who is faithful and everything women CLAIM is important because depending on which type of shoe you wear one day, he’s not looking down at you? STUUUUUUUPPIIIIIIIIID! lol…

Now, statistically, about only 4% of male+female couples have a woman who is taller than the man.  So it’s pretty safe to say that’s a social norm. In a world where people can change their gender/sex [whatever, same thing] on a whim and turn every traditionally positive personal quality into something wrong or incorrect… how is this still a thing?

And why is it so important to women?

I’ve heard a woman tell me it’s a simple and natural case of security. It’s also no secret

that shorter men are looked at, as weak. Not to say it’s sensible or actually rational because we all know, just because someone is bigger than you in size doesn’t mean they can’t fall.  And I have yet to cower to someone [anyone really] just because they’re bigger.  I know he’s an actor, but I doubt very seriously that I would jump at the chance to fight Jason Statham just because I’m taller than him.  Or Jet Li for that matter… they seem like they can whip some ass… And they’re short as fuck.  I mean… is Kevin Hart’s rich ass just S.O.L.?  Or is height not  factor when you have the $? That’s always the exception, right lol? Lord. Jesus…

the bedroom.  Can a man who is shorter than you not please you sexually? Are you not the same height when you’re laying down?  I mean… I know, logistically, standing-doggy-style may be a nightmare but what bout everything else lol? I reference, personally Sarah B., the Canadian teacher in Abu Dhabi when I lived there… I had her tall, fine ass driving to my apartment DAILY. Just sayin’ though!

So, as I wrap this quick one up, as an addition to my other dating WTF blogs like Divorced, Not Looking , How I Feel About: Online Dating , Not Looking For A Hook-Up… what do you think?