Two countries a year.  While I’m still a poor and unwanted man, that’s what I’m limited to. Now, I’ve literally been to five different countries this year, but this shit right here?!?!?!?!?  It’s a first. 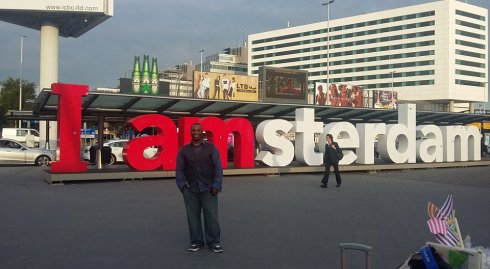 Amsterdam is the capital of The Netherlands, The Haag is more the parliamentary/government head city, and Rotterdam is just awesome.

Dutch = the people and the language

Now that we have the simple geography and basic info that even I didn’t know about until three months ago out of the way, lets get on with the story!

I picked The Netherlands because that’s where the girl you all know as “The Total Package” is from. She hates me now, but that’s beside the point. I had a GREAT time in The Netherlands!

I only had three whole days there.  I figured I’d divide my time between Rotterdam, Amsterdam and The Hague.  Didn’t leave much time for me to get off the beaten path like I usually do when I’m traveling, but I enjoyed the trip anyway.

I started off by flying to Amsterdam, meeting Deborah and immediately taking a train to Rotterdam.

Central train station in Rotterdam is pictured above. We hopped on a tram to get to the hotel so I could put my humongous bag down.  I’d just come from Iraq, so I wasn’t exactly packed for a lite vacation.

The Netherlands is an expensive country.  In America we have an expression “Nothing is free”, but The Netherlands takes that statement to another level.  Things I wouldn’t imagine being charged for, I was charged for.  Needless to say, I parted ways with a few more Euros than I’d planned.

This city was exactly how they explained it. A great mix between the old, and modern. After spending so much time in The UAE, one would think I’d seen enough architectural marvels, but one would be wrong.  Rotterdam is filled with artwork and maritime artifacts and functions [much like the rest of the Hollands] of all kinds that can only be seen there.

Kubuswoningen, in Dutch. They look like a joke in the pictures, but people actually live there.  It was a design to assimilate living as an urban rooftop. That’s a quote.  But the houses themselves are supposed to resemble trees, and the entire community a forest. It was pretty neat! One of the cubes was reserved as tourist attraction/show apartment for those potentially thinking about living there. Had I not been with someone already, I 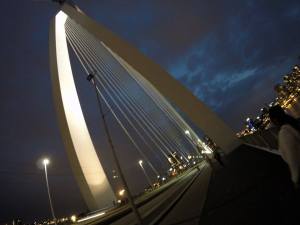 would’ve taken the attendant there home. She was cute as fooooooook.

Anyway, I went back to the hotel and went to sleep after dinner and a walk.  I was extremely tired, I’d been traveling for days and it was the first of three uneventful nights.

The next morning I decided I’d eat breakfast when I got to The Hague, and I’m glad I did.  I’ll tell you why later. We hopped on the train and headed to Den Haag, which is roughly translated as “The Hedge”. On the account that Dutch Noblemen used that land for hunting.

The Hague is the seat of the Dutch government. The King, Queen, all the palaces, the International Criminal Court and Europol are there. On top of that, some cool-ass movies have been shot there, namely “Ocean’s Twelve”, one of my favorites. If you’re wondering whether any of these places are free to explore… refer to what I said earlier.

The hotel I stayed in, in The Hague wasn’t as modern as the one in Rotterdam.  Which I think is appropriate. The Hague was a quiet city.  Real chill, relaxed and I could’ve probably spent my entire trip there for all I cared.  Plus, I’ll always have fond memories of it.  I saw the Premier of  Jason Bourne there and did like two hours of karaoke afterwards.  THAT is my idea of a perfect date, just in case any of you women out there with nothing better to do with your time were wondering. After my bike ride [everyone rides bikes in Europe, The Netherlands is no different… bikes everywhere] I did manage to get a short walk in, and I messed around and happened upon a quaint shoe shop a couple of blocks from my hotel.  There was a nice pair of Adidas skateboarding shoes.  After asking the salesman if I’d be ridiculed for wearing skater shoes if I wasn’t a skater I asked him for a size 10.5.  They didn’t have anything over an 8.  They suggested I tried the Nikes and I was so insulted with the notion I almost vomited. Twenty minutes later…

After karaoke, it was off to bed and breakfast again at the same spot…. I’ll get to that later.  Then, the train to Amsterdam.  One last hoorah in The Netherlands before I head home to my beautiful and disastrous reality.

Amsterdam was crazy!  Crowded as all fuck, and just… not a place to own a car.  I’d say it was The Netherlands’ version of New York City but… I’ve actually never been to New York City outside of JFK Airport.  I haven’t worked up the nerve to do that one yet, surprisingly.

The gay pride parade was almost in full swing so, the already-crowded city was getting more crowded while I was there.  Hotels were booked up, restaurant reservations were all taken, and the rif-raf were out in full swing, day and night.

The big thing for me was the canal boat ride. You learn a lot about the city on that thing.  Everywhere we went that day with the exception of one bike cab, we used the canal boat to get there.  From the Hard Rock Cafe, to the Anne Frank House, which had a line longer than Dirk Diggler’s wang.

That night after dinner, my ex went to sleep and I went out to what was supposed to be one of the hottest Hip-Hop clubs in Amsterdam. Had I not been with someone already… well, you know.  I haven’t mentioned it, but there were perfect tens everywhere in The Netherlands.  Hot women of all kinds.  The Netherlands is kind of what I’d think Canada to be like.  You can’t just look at someone and know they’re Canadian.  Because Canada is like the U.S. Army… they’ll take anyone.  And someone from Jamaica who moves to Canada and becomes a Canadian citizen, is just as Canadian as a French person born there.  The same is with the Dutch people of The Netherlands. White, Caribbean, Indonesian, Indian or whatever lineage, if they’re Dutch, they are going to first call themselves Dutch. They’ll most -likely speak Dutch, and the language of their parents, AND ALSO English.  This is also why the culture of The Netherlands as of late isn’t so rich, however, the culture is awesome to learn about all the same. It’s a true melting pot.

I didn’t get to see even 2% of what the Hollands had to offer, and even less of the rest of The Netherlands, but I did get…

At Humphrey’s, in Rotterdam, The Netherlands 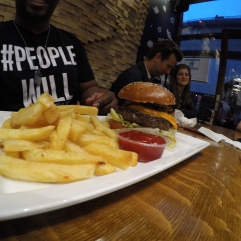 At Catch, in The Hague

At Catch, in the Hague 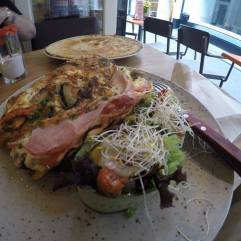 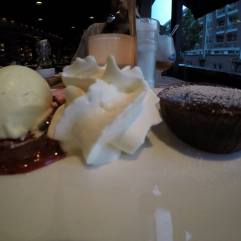 At Humphrey’s in Rotterdam, The Netherlands 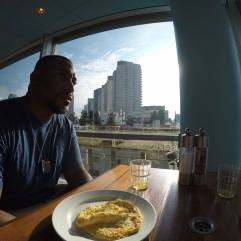 I’d like to start by saying, the next time you see some douchebag taking a picture of their food at a restaurant, keep in mind they could be a blogger.  More specifically, a food blogger.Not for me, but for some people this is their job.  To photograph, rate and suggest food items for people who are browsing for a good place to dine.  What would that report be without real and detailed photos?  Leave them alone.  Leave us alone!!! I know we look stupid, but just be mindful.

Anywho… the food.  Germany has schnitzel, bratwurst, saurkraut. Italy has pasta, and pretty much all pasta related dishes. The Philipinnes has Chicken adobo, pansit, lumpia etc. Korea, bibimbap, kimchee, Greece, suvlaki.  The Netherlands… what’s their delicacy? Sausage? LoL.  They really don’t have a certain cuisine there.  So, the people there, since it is such a melting pot, try theire best to just perfect whatever cuisine they’re most familiar with.  And it becomes another awesome mixture of cultures, just on the tablecloth.

My day in Rotterdam started off poorly with an omelette… well, that’s what I asked for.  12 minutes later a plate with a plain fried egg is sat in front of me.  That is exactly where that plate stayed too.  I looked at the plate.  I looked at Deborah.  I looked outside… and I left.  Btasserie ‘t Ogenblik was a God send.  It’s like, the Heavens knew I’d be hungry when I got to The Hague, and knew to put that restaurant right next to my hotel.  The omelette was an omelette.  Filled with the ingredients an omelette should have!  And the “pancake” which is what I’d call a crepe, was adorned with white sugar and yummy syrup before I was instructed to roll it and then serve myself as usual.  As you can hear in the video, it was better than all the sex that I didn’t have on this trip.

The Burger Bar was also a God send.  I had reservations at this place called “Hummbar”

So, yea. That’s what happened.  I literally wrote this review on Facebook while sitting at the restaurant, fuming!  I mean, PISSED! It was stupid! I’m sorry, and I could’ve taken the burger like it was, but who is paying here?  Me, or them?  If it was a FREE burger, I would’ve taken whatever the fuck they wanted to give me!  But I don’t give a shit if I asked for fourteen pieces of cheese on my burger, charge me for the cheese and put them on the

gotdamn burger!  What the shit!

I highlighted the entire review, and clicked COPY, found the restaurant on TripAdvisor, and was about to click PASTE, right when one of the floor managers came to my left and asked me if I was the one who was having the issue.  She tried to politely explain the protocol at the restaurant about custom orders, which is something my normal server didn’t even try to do. However, her excuses were not met with sympathy.  Especially when she tried to explain some shit to me about burgers.  Me.  ME!  I had to cut her off and tell her not only am I a fat ass but I’m from The Great State of Texas.  We literally invented the burger in 1880!  Don’t play with me!

Not only did they respond on Facebook, publicly, but they did also follow up over email before I left the country.  At least they did that much.  But somehow, without even eating there, they left a bad taste in my mouth.

Yes, I left a great review on Google for Burger Bar, if you were wondering.

Sorry, I have no footage of this, but I went to a nightclub called Club Abe, for their

THRWBCK Thursday Hip-Hop and Reggae night.  Let me tell you… I’m no clubber, but the shit was ‘lit’ as these little fuckers say these days.

Had I not been there with someone already…

😉 Enjoy this video I made while sitting on my couch in my underwear and mismatch socks.

And check out my other travel blogs:

And let’s not forget about my books. Buy them, HERE!

10 thoughts on “Two Dams and a Hedge: My Trip to The Netherlands”