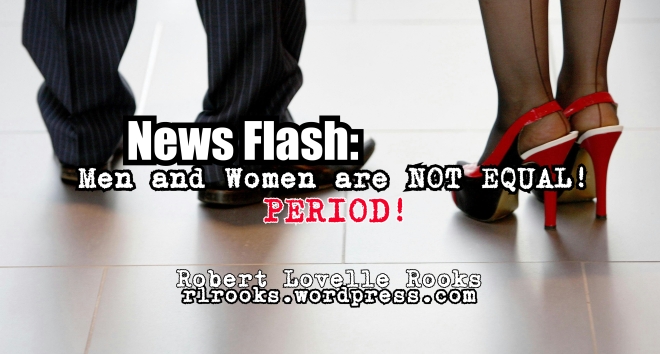 Women have wanted a pay equalisation for some time now.  And why not? They’re learning the same curriculum, doing the same work in most cases, they SHOULD be paid the same.  That’s a no-brainer.  But in life, men and women aren’t equal.  At all. Let’s not get it twisted, even though as of late, people [American’s especially] have been trying hard to muddy the lines between male and female in many different ways; we are not the same. We are not equal.  People seem to think equality means men should be women and women should be men.  But unfortunately, not only were we built differently, we do have different purposes.

I’m not saying women shouldn’t turn wrenches.  I’m not saying men shouldn’t… Bake pies, or change diapers.  I’m saying there is a difference between men and women.  We were obviously put here to serve different purposes.  Look at our anatomy, from our reproductive organs to our upper and lower body physical attributes. It’s hard to not come off as ignorant and sexist when going after such a topic so I’ll stop rambling and just make this extremely plain for you. And afterwards, I want you, the reader to ask yourself, “Do women really want equality?”.

I’m going to start this off lite.  I have not once, in my partying days seen a woman at the entrance to club, bar or any after-hours event complaining that they got in free.  Not once.  Nor will I, I’m certain.  Mainly because I don’t go out anymore, but secondly, WHY THE HELL WOULD THEY? Who in their right mind argues with “free”, “no charge”, “gratis”, “frei” or anything of the like?  You go girl… get that free entrance, and party your equally paid ass off!  You deserve it! 😉 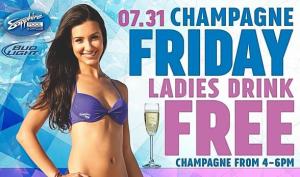 Oh, well FUCK ME, you get to drink free too?  Fantastic!  2 for 2! Get in free, go shake your ass AND drink free too? Nevermind the drinks are poor quality… you’re consuming, for free! When was the last time guys got to drink free?  Not like I care… I’ve never had even a sip of alcohol, but for all my beer-soaking pals out there… buy your own drinks! It’s ladies night!  Or maybe it isn’t lol… Women are drinking for free. [Hell, it doesn’t even have to be the establishment advertising this… sometimes ladies get in free just because they have a vagina… lets be real, then they get to the bar and guys buy them drinks for the same reason… but thats your fault. Dummy.] Get those free drinks girls, and keep your hard-earned equal pay! 😉

Okay, NOW we’re crossing the line.  They get to eat free too?  You know… not everyone parties… not every one drinks alcohol, but we ALL gotta eat!  Right? But in some places women get to do that for free too.  Well shit, you’re partying, drinking and eating for free all because you’re a woman!  Put that pocket book away!  What will cost my penis-toting-self around $125 [club entry, drinks, a meal out] you will pay a whopping $0.00! God, I love equality.

And THAT is just at night!

Let’s face it, I’m not saying women aren’t physically capable.  I’m not saying women can’t do the same thing men do in the military or in the gym.  I’m just saying they normally DON’T!  And when it comes for physical requirements for the same job, and same pay, they’re not required to.  I want to see these same women crying about equal pay, doing just as many pushups, just as many pullups, just as many miles in the same out of time, the same amount of sit-ups and everything else.  As far as I know, the Standard’s Chart hasn’t changed.

Not sure what else needs to be said about that.  I wonder if it’s unreasonable or sexist of me to wonder why that part isn’t equal.

Relationships: Now, since not all relationships cross genders, then I’m apparently only speaking to us few who are strictly heterosexual.  Unless that butch/bitch factor is a real thing in the gay community.  If it is, then you guys chime in too. 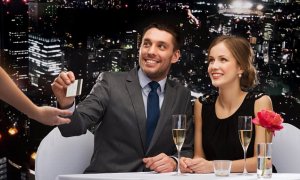 But, from dating, picking up the tab, to the guy calling first, the guy making the first move and the guy proposing marriage and the guy buying the ring first [and ya’ll getting engagement and wedding rings] how is it ya’ll see any of this equal?  Am I saying 100% of the time this is the way it goes? No.  I’ve had several women offer to pay for their meal on a first date.

Well, not several but some.  It DOES happen. But it’s commonplace for the man to pay and to do all the things i listed above.  Just like it’s not uncommon to see men paid more to do the same jobs as women, although you’ll see pay equality sometimes too. The point is… there’s no equality here!  The man is supposed to part ways with more money in the relationship!  It’s just the way it goes.  When a poor man marries a poor woman, or a middle-class man marries a middle-class woman… you don’t hear the wife talking about “Yeah, Ronnie wanted that house with the man cave, a Yamaha R1 and a keg in the bathroom so I had to go ahead and work some over time to get it for him. ”

NO!  No! I’m sorry, fuck no.  That’s not what you hear. What you hear is:”Yea, Cheryl wanted that 6 bedroom red brick house next door to Derrick Jeter’s moms house, a 5 burner stainless steel stove, and an Audi A4 so, I went ahead and go it for her.”

“A happy wife is a happy life” is not just a completely unfair and unequal cliche, that’s real shit.

By the way… how many months salary is a man supposed to spend on an engagement ring…? Yea.

Are we starting to get the point I’m trying to make? You can’t just pick and chose when you want to be equal.  And I know, a number of women would attest to not caring about a number of these things; but if it weren’t a format that was continually perpetuated [by women] it wouldn’t be “a thing” now would it?

OK. This one to me is a big one. Especially when people want to teach gender equality, with no excuses and no bullshit. Reddit, Forbes, Discus and many other forums and outlets have broached upon this subject.  Alimony. 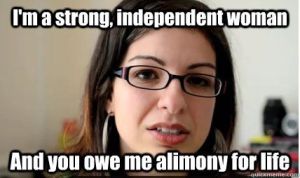 Why is it looked at as something a man is supposed to pay a woman?  Especially in this day of “independent women” and equality? Just as it’s not 100% that women recieve lower pay than men, it’s also not 100% that men don’t recieve alimony.  But it’s just as unfair.  It’s just as wrong.  And come to think of it, this and every thing else I’ve listed on this blog has to deal with money!  So many ways women get over in life as far as money-out goes, but they’re harping on the fact that in a widespread fashion, they make less!  Well… how about we try to remedy all of this?

Custody of a children in a divorce.  This is simple.  Is your baby momma a crackhead?  Is she a hardened criminal?  Does she opnely sell her body? No? Well guess what… you my fellow man will NOT get custody of those children and will have to pay child support if she choses to put you on it. The only way I’ve ever seen men gain custody of a child are as follows.

That’s it!  Very rarely are you going to see a man get [full] custody and be able to put a woman on child support. Why? Because men and women are NOT equal. Most judges in most courts will rule in favor of the mother, no matter how broke, mean, dirty/nasty, stupid and or irresponsible she is!  Why? Because she’s the mother.  She’s a woman.  NOT. EQUAL.

So women want to be paid equally to men.  That again is a pretty reasonable cause.  But the path to this equalisation is fraught with many polarizing factors that I don’t see women up-in-arms about.  I recall hearing about this lately on the news from a perky woman with tons of make up and a glamorous hairdo.  It’s not her fault she’s busty.  And it’s not uncommon for women and sometimes men to wear make up on the set. But take a look around the news rooms across America.  News castors, anchors and meteorologists… how do they dress normally?  Sometimes I swear I’m watching UniVision. You know… one of the Mexican stations where you can’t tell the news unless youre a fucking dimepiece?

Mm mm mm, to GOD be the glory.  My, my, my.  Anyway, don’t get mad at me, I’m just putting the information together and giving it to you. You don’t have to go to Mexican television to see this.  And of course, I’m certain someone will counter with “They make those women dress that way” So doesn’t that imply that these women are getting these positions based on their booties, breasts and [flat] bellies and not their brains? (like that alliteration?) That’s what it tells me!  The fact that women can and have and will continue to use their beauty, bodies and sexuality to get ahead should all but silence this movement, and let women know their plight is more at their own hands than ours or “society’s”.

Now, I know you’re thinking that I’m sexist right now.  Well, whatever.  I’m not, but I don’t care what you think, you’re a woman! :p But seriously, I know there are a number of women out there doing it right.  But just think of the huge number of women out there fucking it up for ya’ll  On top of all the factors that women don’t think about when demanding like-wages!

You’re a woman, you want a higher wage but you have no problems with women being targeted for discounts and free shit.

You’re a woman, you want equal pay but don’t see the need to also change the standards to get your position.

You’re a woman and you want men to make the same as you but you expect him to break bread with you after you divorce, take custody of the kids and a percentage of his money?

You’re a woman and want the wage playing field evened but know you can use your physical attributes to get ahead?

ALSO, CHECK OUT MY BOOKS. WWW.WRITERRLR.COM

8 thoughts on “News Flash: MEN and Women are NOT Equal. Period.”