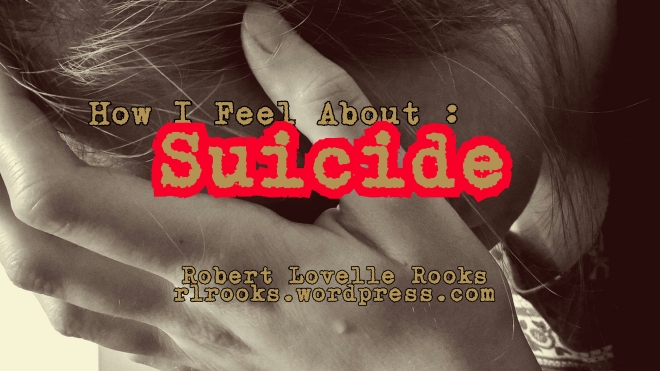 So, I’ve decided to start the new year off on a positive note as you can see!  This is one of those topics I’ve been asked about, been argued down about and also been excommunicated for, numerous times within the last 15 years. Also one of the few people have asked me to blog about. So,  here goes:

This shouldn’t take long because my feelings on this subject are quite singular and unchanging.

Before I get started, if you’re actually contemplating suicide please speak to a loved one or call the National Suicide Prevention Lifeline @ 1 (800) 273-8255

As we all know, committing suicide is simply the act of causing ones own death.

The means of causing suicide have varied for many different reasons such as location, time in history and the availability of such means. For example, if you’re locked up in prison you most likely won’t be comitting suicide with a gun because you shouldn’t have access to one.

Suicides have some pretty distinct risk factors and causes such as homelessness, financial dispair, mental illness/brain injury, post-traumatic stress (ie. war, witnessing a murder) and one that I personally have seen more than anything, love and relationships.

My opinions about suicide are not popular.  Granted, whenever I speak on the subject it’s usually stemming from a topic about a recent death caused by a suicide that  I’m well-informed on.  I haven’t verified any psychiatric issues in the people who have committed suicide.  But then again, how could I?  So, in a general fashion, I simply hold everyone responsible for their actions.  Whether that action is having unprotected sex with a prostitute in Bangkok, or eating glue.

With that being said, I think comitting suicide is a completely selfish act, and I have no sympathy for anyone who does it.  Nor will I ever.

So you can start hating me.

And now that you realise that I know you hate me, you can react as if you don’t care about my opinion, even though you do.

I was recently attacked on facebook by a woman who is a widower of an Iraq Vet.  His service and dedication to our country has my unbriddled respect, but the moment that responsibility and burden of what he’d been through became so much that he took himself from his wife, and children, friends, loved-ones and fellow soldiers, my respect and support stops. I had met this woman shortly after her husband had killed himself and she was distraught, but also flirting with me and talking about what she was going to do with his SGLI IF she were to get it [I’m hoping she didn’t]. Plus… she really never had much nice to say about him anyway.  But, maybe she was just going through the angry phase, which is of course okay.  Fast forward a few years, and now every time Veterans Day, Memorial Day, or Labor Day comes around, she’s talking Dorito’s about her dead ex-husband.  And about how honorable he was, and soliciting support for suicidal people.  I really don’t dig it.  And I also don’t dig the fact that just because I don’t feel like paying homage to someone who took their own life that I’m labeled as a bad person.

I know war vets who were killed in action.  THAT is an honorable death.  And I’ll continue to honor those KIA.

I also have several examples of people close to those who have committed suicide using that event to publically plea for sympathy.  Have pity parties, and generally just be pathetic just for the sake of being pathetic.

People who repeatedly try to kill themselves, using it as an attention seeking device, or the proverbrial “cry for help”… I have no sympathy.  I really don’t.  Everyone has shit.  Heart break.  Traumatic and dramatic experiences.  Parental problems, child problems, rejection and all around shitty times in life. 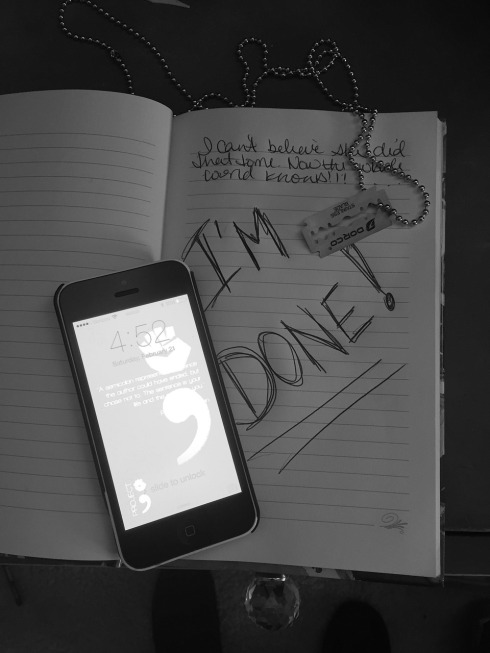 If you have the ass to write a suicide note? Oh, hell no… definitely no sympathy. Do I really even need to get into that?  Writing the note means you want someone or everyone to KNOW exactly why you did it, and want them to FEEL BAD ABOUT IT! You knew you were feeling down and instead of trying to get some help, you write a letter basically showing you’re cognisant of your actions and pinpointing the things which have led to this; then are making a conscious decision, to ruin everyone’s day.

I haven’t had a leg blown off at war… I haven’t had a wife screw my brother… or found out one of my children arent mine.  And everyone has their own breaking points, but no one can tell me when or when not to break.  With THAT being said, according to people who are sympathetic to suicidal individuals, I HAVE THE RIGHT TO TRY AND TAKE MY OWN LIFE.

Let’s delve into that.  I have a wife… and even though she doesn’t like me, and wants to hurry up and sign them papers, she’d be pretty upset if I were to kill myself.

I have children… who, I think would be pretty confused, upset, sad and angry that I died…

Parents, especially a mother who would be completely devasted.

I have an extremely small handful of friends who would be wrecked by this information of my demise.

And there are a shitload of women out there who would be completely knocked out of their seats once they learned that I took their chances of taking a swing at me away.

All because I can’t handle something.  And I see killing myself as the only way out.  As far as mental illness goes, unless theres one which makes you inflict harm on yourself WITHOUT YOUR KNOWLEDGE, all these ‘suicidees’ knew what they were doing when they hung themselves, shot themselves, slit their wrists or swallowed all those pills. I’d know… what I was doing.  But I just care about a way out.

No… absolutely not.  No sympathy.

I know… it seems heartless.  My opinion is heartless. Not someone takin their own life… Naw,  that’s sad and deserving of pity, right? Because I’m certain people will focus on mentally unstable individuals… whom you can’t really prove don’t know the concequence of their actions.  But I doubt very seriously that the majority of suicides are in this bracket.  Furthermore, if you want to be angry at someone, be angry at the people around this person who didn’t do enough to stop these things from happening.  But alas… if someone wants to take their own life, they’re going to take their own life.

And again, I really have no sympathy for them. Because there’s always, ALWAYS a better way. And if you can’t see that, maybe you don’t deserve to be here…

13 thoughts on “How I Feel About: Suicide”